Desolate terrain. The British objective is the village and well at the far end of the table. The Egyptians deployed first but could hide units in the wadis (brown felt). 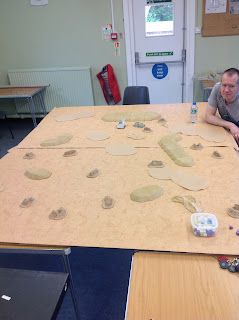 British deployment was a bit spread out. In the centre we deployed an elite Bn. 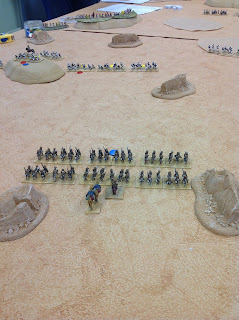 The British cavalry rapidly advance on the right with a view to doing some reconnaissance and were set upon by hoards of  Egyptian cavalry emerging from the wadi to their front. 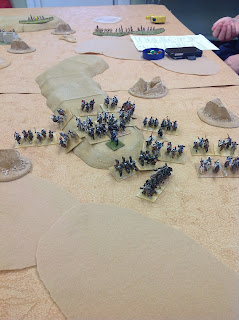 On the right was the second bn with the marines and guns forming a reserve. 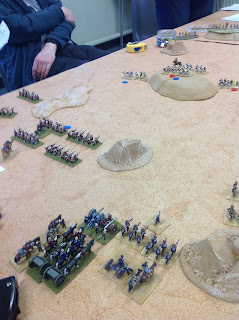 Not unsurprisingly the British cavalry are over run and the enemy use the wadi to approach the British centrre. 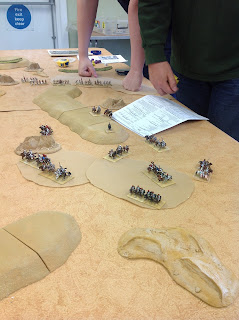 The British are forced to turn to face this threat having defeated the first line to their front. 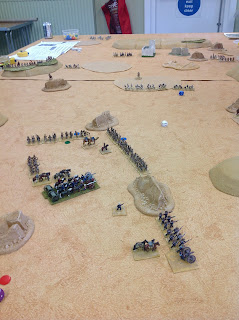 After clearing forces on the hill the British left is faced by an even stronger force behind entrenchments. 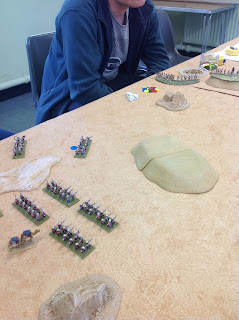 More Egyptians advance to the fray. The British have been forced to converged on the centre and are being shot at from all directions. 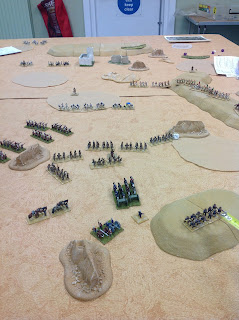 The Marines have turned to the rear to face off the enemy cavalry attempting to come around that way. 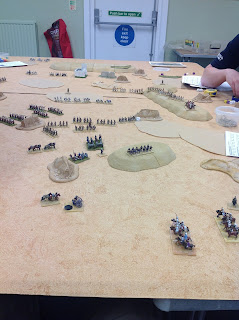 The Marines managed to see off the cavalry however the centre was taking fire from all directions and suffering casualties accordingly. It was a bit of an ignominious defeat for the Brits with words spoken in the house.
Fun set of rules with movement and morale combined in one throw like Fire and Fury. British fire power was superior but couldn't be combined with movement. The Brits had spread their fire power too thin and ideally moving with one company whilst firing with another would be an ideal tactic but it was difficult to implement. Another go next time with better understanding of the rules should even things out.
Posted by Pete at 02:06