Noel and myself endeavour to arrange a couple of days wargaming with our friend Gary at his place near Peterborough as often as we can. He has an excellent gaming room, an expanding collection of  armies and understanding wife.
First game up was a Napoleonic one using Black powder.
Objective: The light Division is conducting a fighting withdrawal and should endeavour to bring as many troops back to the baseline (foreground) as possible. British troops in the foreground are in reserve and can offer little assistance to the Light division. 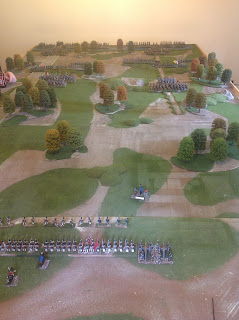 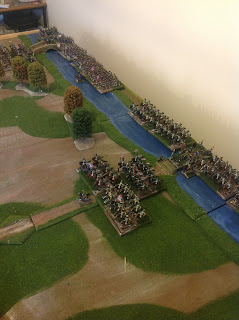 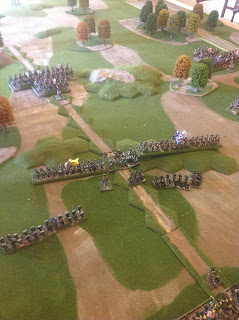 French initially assault with Chasseurs and lancers but the British cavalry see them off. 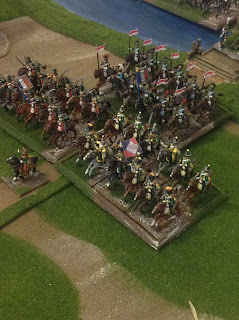 With a breathing space the British begin their withdrawal. 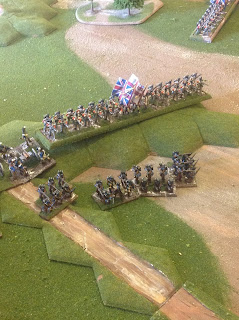 However French cavalry from the other flank come across and assault the line, singling out the battery at the end of the line. First mistake of the British was not to attach the guns to the line so that they could not be singled out. Quickly overrun the lancers wheel onto the line alongside. British cavalry close in to deal with the lancers. 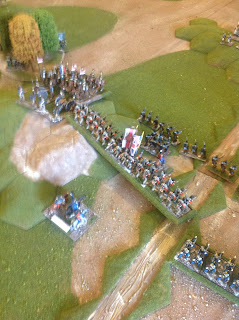 British make a further withdrawal as the French follow up with infantry. 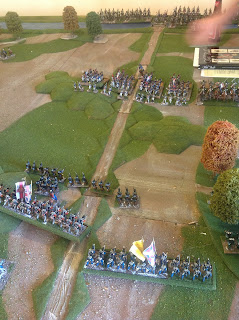 On the British left, the French with fewer cavalry in support press forward with infantry. 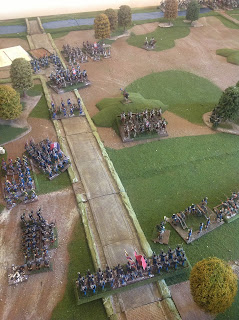 The British are now finding it more difficult to withdraw before the French and make a stand around the centre of the table. their second mistake was to withdraw their cavalry too far back so that it could not effectively support the infantry. 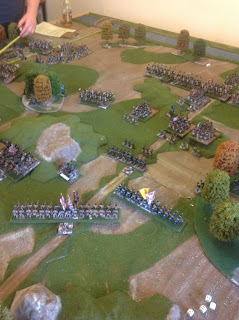 French assaults are more coordinated, pinning the British down. 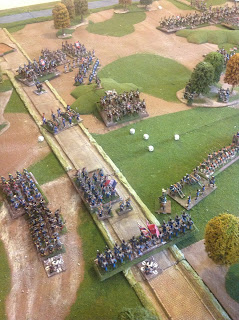 After a couple of delays (poor dice throws) the French bring their superior cavalry numbers to bare. Defeating the British cavalry and effectively leaving the infantry stranded. 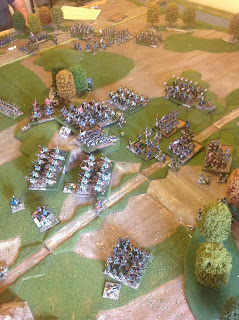 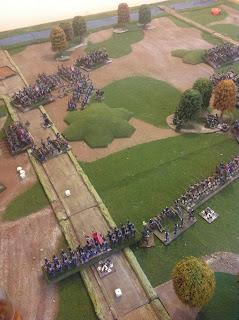 Casualties mount and it is unlikely that the British can effectively disengage. 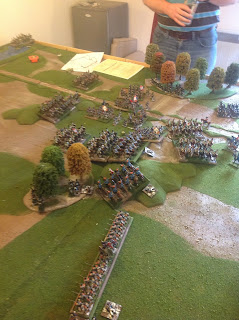 Victory to the French.

Enjoyable game. You either like Black powder or you don't. One argument is whether a set of rules can cover a vast array of periods and theatres, even if there are some period specific modifiers, like steady line, advancing in column. You can also have unit specific characteristics like sharp shooter, marauders; some of which we forgot to apply.
I like the large movement rates and the generally quick firing and combat resolution. We need to clarify whether two units can simultaneously assault a single unit. I also like rules that can accommodate single unit bases.
Posted by Pete at 00:47