First off WLL stands for the West London Legion, my local wargames club situated in Northfields, West London.
Last Sundays game was set in the American Civil war and this is a brief account for the record.

Overview:
Confederate forces plan an early morning attack on Union defences with the objective of destroying the naval batteries covering the James river. 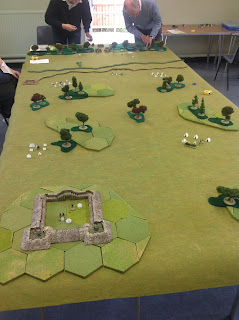 Initial movements by the Confederates were "Out of command" and direction randomised to reflect the early morning confusion. The Union forces were on a random activation roll, with the forward defences being only lightly manned. Main forces were in the encampments. Reinforcements would appear after on table forces activate and would build up using a PBI approach. That is dicing for bases to form up but having the option to deploy early but forgoing unformed bases.

The Confederates emerge from the woods... 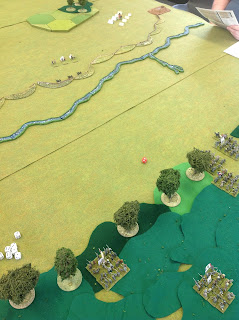 Turn 3 and the Union forces awake to find the Confederates nearly at the entrenchments. As far as ACW battles go the Rebels showed remarkable coordination in their attack. The Union gunners manage to man the guns and form the only significant defence along the entrenchments. 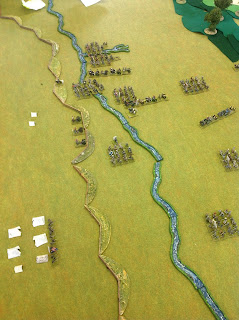 The first line is quickly over run, although the battery manages to unleash a crippling cannonade on one of  the Confederate units. The camp (closest) is over run and ransacked, sending its Union occupiers quickly to the rear. Rebs on the far side form up infantry and a battery to clear out the opposition from the other forward camp. 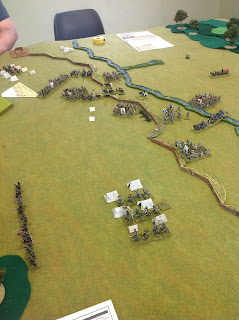 First stage of the Confederate plan is working well. Forward units cleared and only one Union regt in any good state to oppose the advance. (back out of sight, the Union regt in the foreground is still running away) 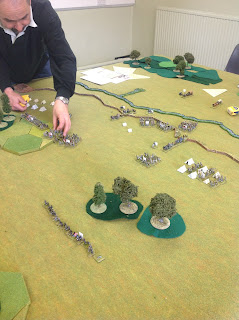 The depth of the defences however is slowing the Confederate advance and neighbouring reinforcements begin to arrive. A Union regt (foreground) advances to the assistance of the remaining Union regt (near the camp) as Confederate forces bear down on it. 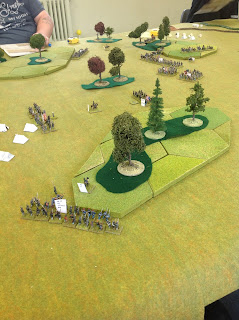 Confederate forces concentrate towards the centre, endeavouring to delay contact with Union reinforcements appearing on their flanks. 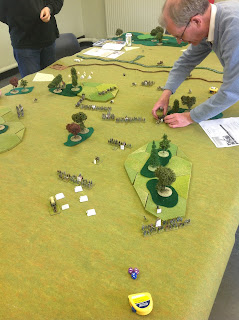 As Union reinforcements build up in the centre and flanks and it looks exceedingly less likely that the Confederates will reach the batteries, the Confederates try one last push down their left flank. As lady luck would have it, a Union regt arrives nearby and immediately attacks (near red dice). 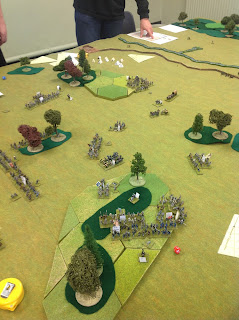 Although the Confederates manage to push further forward they are running out of steam. The Union have reached their casualty break point (a mechanism in the rules whereby additional modifiers affected movement and command) and although they would be less likely to counter attack they would still provide sufficient obstruction to deny the Confederates their objective. Conclusion: It turned out to be a well balanced game giving both sides opportunities to make critical decisions. The Confederates coordinated their fire power much better which resulted in the Unions reaching their casualty point first, as expected with the more organised advance. As with the sister set of rules (Fire and Fury) combat has a D10 modifier which removes all predictability out of the outcome. Units tend to flow back and forth with nothing (usually) decisive occurring but more an erosion of combat effectiveness. This I think gives the rules a good period flavour (refer Red Badge of Courage) and importantly a good game and I would recommend the rule set to anyone interested in the period.

Note to oneself: Get off arse and take photos from different angles.